Each year in May, about 1500 students graduate from Harvard. And within months of their graduation, there is a big, observable jump in both ice cream sales and the number of shark attacks. The data is predictable and tightly correlated, so obviously graduating from Harvard leads to shark attacks.

Okay, perhaps Harvard graduates are not the cause of increased shark attacks (maybe ice cream is the real culprit). Or maybe there is something else going on here.

When you confuse correlation with causation, you’re going to be misled. Sadly, we humans are suckers for the shell game called correlation. We love correlation stories as much as we love ice cream. Speaking of eating, have you heard that eating breakfast helps you maintain a healthy weight? But before you pour yourself a bowl a Fruit Loops, watch this video about correlation and learn why many of those studies reached the wrong conclusion.

So what do sharks and Harvard grads have to do with recruiting?

Typical recruiting processes rely entirely on the shifting sands of correlation. People confuse what is readily observable with what actually makes a difference. Think about what happens when you scan a resume. Your focus in on finding a set of attributes that correlate with what you think it takes to be successful in a job. Maybe you see a Harvard degree and think, “I bet she’s smart and driven.” (Or maybe you think, “He’s probably an elitist snob.” Either way, your brain fell into the correlation trap.)  You formed your opinion based on what you saw, and ignored information you could not see. Obviously not all smart and driven people went to Harvard, and not all Harvard graduates are smart and driven.

And this correlation problem goes far beyond college degrees. Any time you look for people with the right years of experience, job title, or accomplishments on their resume, you’re only looking at correlations. (If we actually thought about what drives success, then we wouldn’t write job ads requiring a “Proven track record of success.” The false assumption is that past success (elsewhere) predicts future success (at your company). People get this wrong all the time, judging performance without understanding the context in which someone succeeded or failed.)

Actually, I’m being too kind to traditional recruiting. Recruiting not only gets causation wrong, it doesn’t even get correlation right.

The only reason to hire is to solve a business problem, but recruiters never try to find everyone in your job market with attributes correlated to solving the business problem. They only look for the small subset of people with backgrounds that the hiring manager believes can successfully solve a business problem. If the manager has a limited background – or worse, a limited imagination – that limits who will be considered. When the hiring manager can’t imagine solving the business problem another way, then the recruiter will also eliminate all the people who solve the problem another way.  Recruiters follow the fastest path to getting the hiring manager off their back, they don’t have the luxury of considering that maybe the manager’s list of correlated skills is a fantasy. So when the hiring manager describes a unicorn, the recruiter goes hunting. And hunting for manager-defined correlations often gets the same results as hunting for unicorns.

So if correlation-based recruiting is not the answer, what is?

The next evolution of recruiting is market research. Traditionally, the recruiter asks the hiring manager for directions – getting the manager’s one known route to job competency. Then the recruiter drives up and down the manager’s route looking for “perfect” resumes. The assumption is that someone good must be on that path right now, because the manager was probably on that same path years ago.

But a market research approach is more akin to Google’s fleet of Maps cars, constantly learning about all the new paths that lead to job competency.  A diverse recruiting approach not only considers more people, it helps discover nonobvious factors that might cause someone to be successful. Armed with market data, a recruiter can engage in a meaningful dialogue with the hiring manager, rather than simply asking, “Do you want fries with that?” as they pack their bags for the unicorn hunt.

When you begin to consider more people from other industries or nontraditional backgrounds, you find yourself competing for talent in a much deeper, much broader pool. So you also need to think more broadly about compensation. You’ll often find your competition for your new star candidate is an entirely different set of employers than you’re used to competing with.

A typical way to determine compensation looks like this:

If you are trying to solve a business problem, that’s exactly backwards. Instead do this:

A market-research approach to recruiting means that your hiring results and business results become inextricably linked. Yes, you might need to think about your organizational structure and compensation levels. Yes, it does demand more from your recruiting team.

But at least you can stop being the patsy in the correlation shell game.

Consistent hiring of top performers is possible, even with the inherent unpredictability of both people and job markets. Because the problems of hiring are with the typical hiring process itself, not with candidates or the job market. Download our Consistent Hiring Guides to learn more. 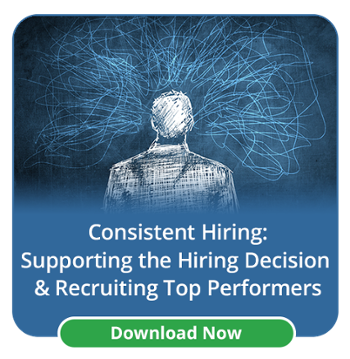 This article originally appeared in The HR Examiner